in place and ready to start

I'm at the Haedanghwa Pension, having arrived around 4:30 p.m.  Getting here was an adventure in itself. Allow me to explain.

There wasn't much for me to pack, so I reserved trip prep for this morning.  I was out the door by 10:30 a.m., having determined that I should grab a bus at the nearby Express Bus Terminal (고속 버스 터미널).  I took the subway a few stops, got off at the terminal, then realized I didn't know which bus line I needed to get on.  I shrugged and headed for the "Central" terminal, but when I got to the ticket area, the lady at the counter told me I needed to cross back to the other side of the terminal.  Wrong bus line, apparently.  I crossed back to the other side and asked a different lady at a different ticketing counter about getting a ticket to Goseong.  She said that no bus went directly to Goseong (thus contradicting what Google had told me), and that I ought to check with the information desk about how to reach my goal.  So I went to Information.  The lady there explained that, to reach Goseong Intercity Bus Terminal, I would need to take an express bus from here to Sokcho, then take an "intracity bus" (시내 버스) the final few kilometers up to Goseong.  The intracity-bus trip would take close to an hour, she said.

Now armed with proper knowledge, I went to a ticketing machine, punched in the required information, and got my ticket to Sokcho.  The bus for Sokcho would depart from Space 19 at 11:30, so I headed to that spot and waited for the bus.  As I've learned through trial and error, the bus you want never arrives for boarding until about a minute before departure, so there's no point in arriving at the boarding area too early.  I therefore took my time walking over to Space 19, and the bus arrived in due time.  I got on board, scanned my ticket, and sat in Seat 16, my assigned spot.

At precisely 11:30 a.m., we got under way.  The ride was scheduled to take three hours, but it ended up taking nearly four because of a nasty traffic jam caused by an accident that slowed travel to a crawl.  Instead of arriving at 2:45, we arrived at around 3:40.  Since I wasn't in any rush to reach the pension, I wasn't upset about the delay.  I lumbered over to the Sokcho bus station's 7-Eleven, got myself some Reese's Peanut Butter Cups (the 7-Elevens all seem to be doing a Reese's promotion these days, which makes me happy:  those peanut-butter cups are a childhood favorite of mine), then went to the ticket window to ask the lady where I could find the intracity bus to Goseong.  She said I needed to walk up the street a bit, then take either Bus 1 or Bus 1-1.

I wandered out of the express-bus station and up the street as the lady had advised, and I found the bus stop she'd mentioned.  Noting the bus stop's location, I looked for a place to sit down, remove my damn face mask, and enjoy my Coke and my Reese's in peace.  I found a spot near an eMart, next to a quasi-abstract sculpture of a human figure. I munched on my chocolate, slurped my Coke, then went back to the local bus stop to await Bus 1 or 1-1.

Bus 1 eventually rolled up, but when I stepped aboard, the crusty old driver pointedly asked me where exactly I was headed in Goseong.  It apparently wasn't enough just to say "Goseong":  the driver needed to know exactly where I was going so as to charge me the proper fee.  I told him I wasn't sure; he asked, "Could it be Ganseong?", and I nodded yes.  Ganseong is an alternate name for Goseong, and I belatedly realized that I did know where I wanted to be dropped off:  the Goseong/Ganseong Intercity Bus Terminal. Anyway, confirming "Ganseong" was enough for the driver to charge me W2000, and we were off. The ride had many stops; I was able to glimpse the ocean at several points as we made our way north along the coast from Sokcho to Goseong.  We finally reached the Ganseong Intercity Bus Terminal, which was a stop unto itself, and I got off.

The next step was to hail a cab to take me the final 20-some kilometers to the pension.  A cab finally pulled up to me, and I got in and explained where I was headed.  The cabbie knew the pension in question, luckily, and we headed off.  I should note, at this point, that I was now very, very close to the DMZ.  In fact, I think Goseong is north of the 38th Parallel.

It was a long ride that set me back almost W30,000, but I had mentally prepared myself for that eventuality.  We followed a highway, watching civilization become sparser and sparser, until we ended up in the very quiet little town where Haedanghwa Pension was located.  I thanked the cabbie and got out.  The weather both here and back in Sokcho was unseasonably warm, more jacket weather than coat weather.  I had elected to take my winter clothing along, anyway, just in case.

I snapped a picture of the pension, and the lady with whom I had been texting (to make reservations here) came out to greet me and to guide me to my room.  As with Sang Gwa Gang Pension along the Four Rivers path, this pension didn't use room numbers.  Instead, it used cutesy names.  I was to be lodged in the Herb Room.  I asked the lady whether the pension had a restaurant on the premises, given that the word "맛집" (mat-jip), a term used to describe restaurants, was written in large letters on the building's front.  The lady looked apologetic and said no.  Inwardly, I grumbled about false advertising.  I was hungry after crossing the country from west to east, and my only meal thus far had been some Coke and some Reese's Peanut Butter Cups.  I consulted my phone to see what local convenience stores or restaurants there might be; there were no convenience stores in the immediate area, and the restaurants were all several hundred yards away from the pension.  I had seen a few of them while in the cab; they all looked to be closed.  So I decided that, given the late hour and the inconvenient distance, I would forgo the restaurants and just tough it out with no food tonight.  As I jokingly texted to my brother Sean, I would consider this a purification ritual.

My room is quite nice; as with the pensions I've been in on other walks, this one has a kitchenette that I won't be using.  The views out my windows aren't particularly fetching; I can't see the ocean from here, although I can hear the neighborhood dogs barking at nothing.  Aside from that, the room's facilities are adequate:  there's a heated floor, bottled water in the fridge, and a much-needed power socket next to the bed, which is way too soft by my standards.

I'd like to upload pics of the day's adventure, but I'm getting a "server rejected" error every time I try to upload, so I'm afraid there'll be no pics for the time being.  If this continues throughout the trip, you'll have no choice but to rely on my scintillating narrative prowess (cough) to evoke images of the east-coast bike path.  I'll upload the pics once I'm back in Seoul and able to find some sort of workaround to this problem.

I'll end with these thoughts:  I wasn't sure what to expect when I got out to the coast.  Sokcho turns out to be very built up-- a city in all sooth.  Goseong is less built up, but it's obviously not a no-man's land.  I get the feeling that the coast isn't going to be like the Four Rivers path:  I'm never going to have a middle-of-nowhere feeling as I walk beside the ocean because beachfront property is a highly coveted commodity for tourism, residences, and industry, which needs its over-developed ports to be able to access the rest of the world.  This isn't going to be a quiet, serene trek along calm, sedate river valleys, and there won't be moments where it's just me on the trail.  I'm not sure how I feel about that, but I guess we'll all know more in a few days.

ADDENDUM:  some family arrived a bit after I did, and they're either next door or right above me. Noisy assholes. 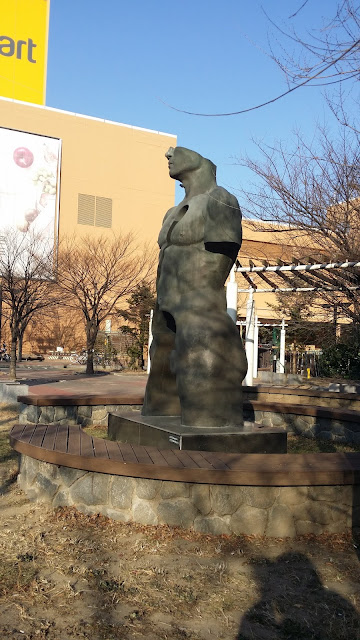 One of many tacky-looking motels in downtown Sokcho: 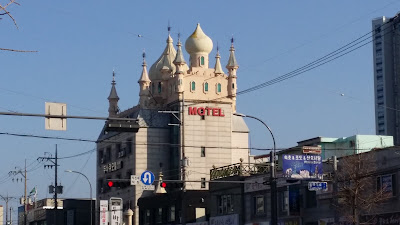 A belated look at my express-bus ticket: 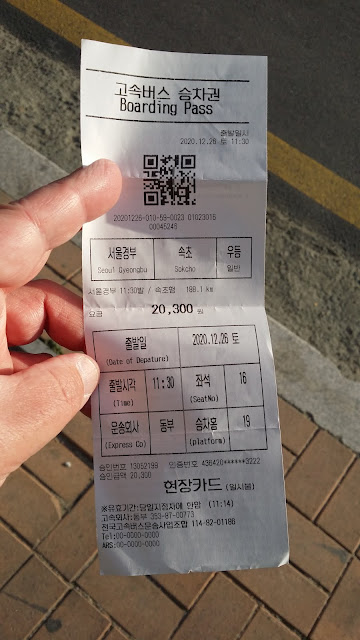 On the local bus and headed north to Goseong Intercity Bus Terminal: 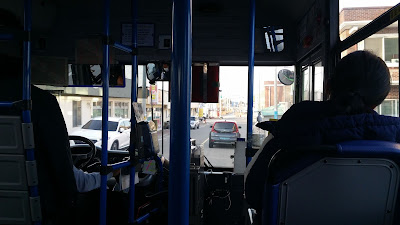 A tantalizing glimpse of the ocean from out the bus's window: 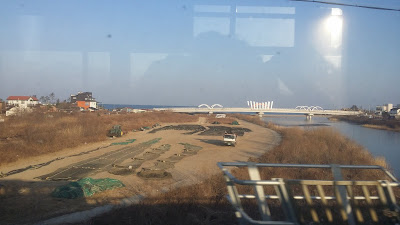 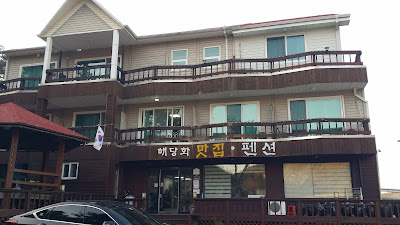 The word "Herb" in Korean, acting as my room number: 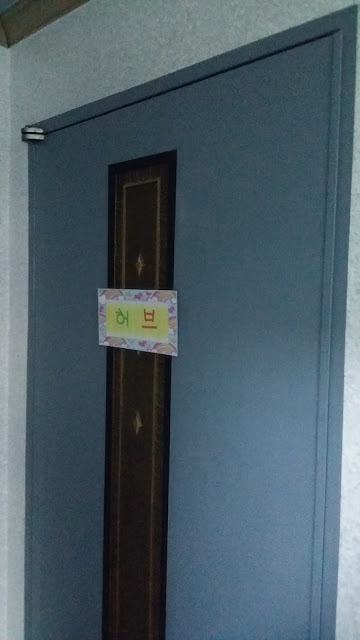 First look (the phone cam darkens everything when there's a bright light source): 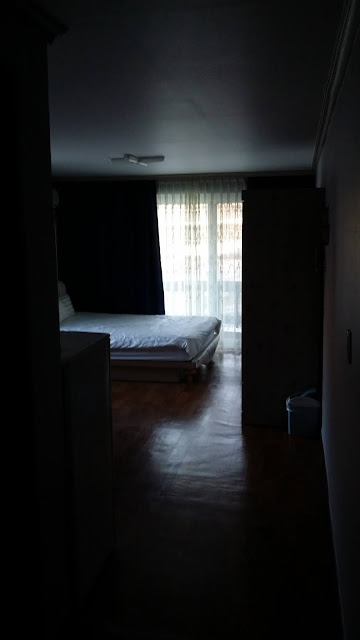 I've flipped the room's lights on: 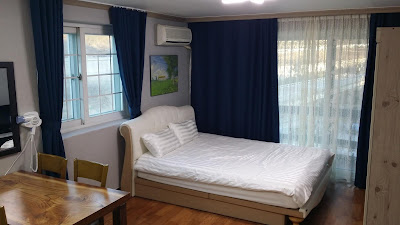 A pension has most of the features of a studio apartment: 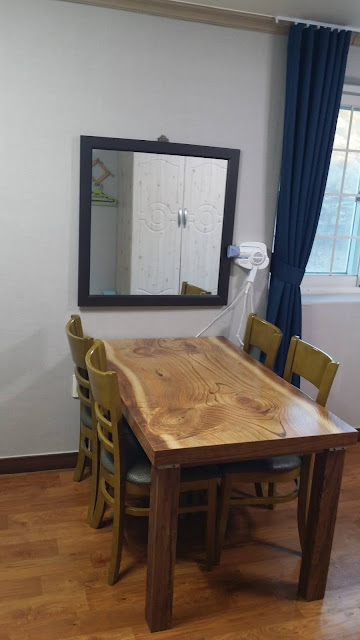 Those features almost always include a kitchenette: 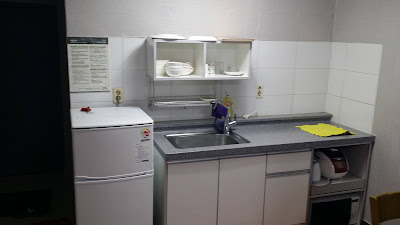 I spent a lot more time on the east coast than I did the west back in the days when I had a Korean wife. Always enjoyed myself.

Kevin Kim
I hide in God's nostril and await the sneeze that will set me soaring. The unwise, meanwhile, wedge themselves between God's buttocks, expecting a similar wind.